Child Of The Sea

Lost & found studio recordings (1971-79) by US singer-songwriter SID BRADLEY including some of the sought-after 45 sides released with his band ERIK in the early ’70s plus fabulous previously unreleased tracks. This is serious stuff, folks!! Pro-sounding sound, ranging from fuzzed-out psychedelic hard-rock to psych-pop and proto-power pop. Master tape sound and insert with liner notes by Sid Bradley and Thomas Patterson (Shindig!).

A phenomenal and versatile songwriter (he has written hundreds of songs) Sid Bradley started to play in garage bands like The Cavaliers in the 60s and by the early 70s he was part of Erik, a group responsible for a couple of self-produced 45s, “Child Of The Sea” / “Nothing Is Easy” and “Sometime In Your Life” / “Rebel Woman”. These 45s were usually used for promo purposes and it was typical of Sid to load a few record boxes into his car and travel hundreds of miles, visiting all the radio stations, trying to pitch his music to the DJs. This one-man marketing operation actually worked fine, as Sid’s music was played in radio stations across the eastern US, Canada, England, and even Germany. And some of his songs were reviewed in Billboard, Record World or Rolling Stone.

You may be familiar with the hard-psych sounding “Child Of The Sea” as it has been included on several psych comps and it was also part of the “Lodge 49” soundtrack. The flip, “Nothing Is Easy” wouldn’t sound out of place on any Rubbles volume. “Rebel Woman” is now considered a proto-metal cult classic and it was recently included on the “Brown Acid” series.
After the demise of Erik, Sid continued recording his songs using different musicians. Most of these tracks remained unreleased until a few years ago, when Sid, encouraged by the interest on his old Erik 45s, decided to remaster them and put them available on several Digital only albums that caught the attention of mags like Shindig! We’re now very glad to present a selection of those tracks, collected for the first time on a vinyl LP.

“…a gifted singer-songwriter with a love for late ’60s songcraft and the more muscular powerpop of ’70s contemporaries like The Raspberries” – Paul Osborne (Shindig! magazine) 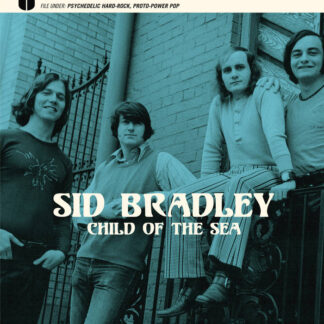 You're viewing: Child Of The Sea
Add to cart