Long before there was an ‘highway to hell’ late AC/DC singer Bon Scott was the front-man of Australian own Fraternity, a Sydney rock band formed in 1970. For the first time on this delicious gatefold double lp you’ll find the complete recordings of this unbelievable act. Formerly four members of the Levi Smith’s Clefs, John Bisset on keyboards, Tony Buettel on drums, Bruce Howe on bass guitar and vocals, and Mick Jurd on lead guitar. Due to conflict at the time with their singer, Barry McAskill, the group abandoned him and relocated to Adelaide in 1971 to restart their career as Fraternity on the Sweet Peach label.

Fraternity’s debut release was a cover of The Moody Blues track “Question” backed with an Ashdown/Stewart song “Why Did It Have To Be Me?”. While the band had competent recording vocals, they were lacking a definitive front-man. Bon Scott at the time was performing with a group called The Valentines. The band liked his raw energy and felt that he would be a good addition to the band. After some persuasion, Bon agreed to relocate and joined them as lead singer.

The band’s biggest local hit was a cover of Blackfeather’s “Seasons of Change” which peaked at No.1 in Adelaide. In 1971, Fraternity went on to win the Hoadley’s Battle of the Sounds. Bon Scott’s previous band, The Valentines, had been a finalist in this competition two years earlier. Fraternity were now being touted as “The Next Big Band” and the competition prize was a free trip to London. However, this trip would go on to be the end of Fraternity as we know it. Remastered and fully licensed. 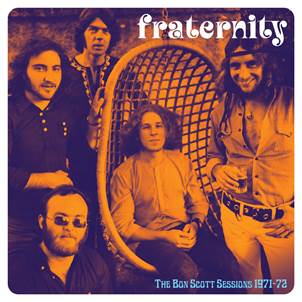