We are proud to present for the first time ever the lost 1976 / 1977 recordings by this legendary band from Barcelona. Suck Electrònic Enciclopèdic were born in 1975, in the last days of Franco’s dictatorship, when Spain was awaking again to democracy and everything was possible. Even with the menace of an army too friendly to the old regime a fresh new breeze was spreading the change, and S.E.E. were an important part of its musical underground movement and the ones who brought influences from their kraut cosmische heroes Klaus Schulze or Tangerine Dream to it.

The constant line-up changes (over 30 musicians have been members of S.E.E. at one time or another, with some of them moving to other important projects of the era – like Neuronium, for instance) made it difficult for them to produce a consistent recorded work. Actually they only released one LP and it was already in the 1980’s, but the recordings contained on Asfixia al carrer València where done in their early days, when they were at the peak of their creativity in 1976 / 1977. At that time they had a unique sound that no one else shared since they were building their own synthesizers and they were the only Spanish band to feature four keyboardists, and also one of the few to tour with bands such as Embryo, Etron Fou Leloublan, Potemkine or Henry Cow. They were part of the Rock In Opposition (RIO) collective along with Stormy Six, Univers Zero, Samla Mammas Manna, Art Zoyd, Art Bears, and other experimental progressive avant-garde outfits.

The Wah Wah LP is a selection of tracks from more than three hours of material that was recorded but never released. Plans for LPs produced by Kevin Ayers and Robert Wyatt were made, as others to record in France – first in Avignon’s Free Son Studios under production from Daevid Allen and David Vorhaus with the collaboration of Shakti Yoni, and then in Tolouse’s Tangara Studio with Jean Pierre Grasset from Verto – but they never materialised.

A phenomenal document of the electronic psychedelic sound that Suck Electronic Enciclopèdic were exploring in their early days, including plenty of photos and memorabilia to transport the listener to their world of science ficcion imagery, psychedelia and progressive experimentation that was to supply a lot of influences to many bands to come in the Barcelona scene.

Previously unreleased, recorded between 1976 and 1977, the Wah Wah issue will come housed in a quality glossy laminated gatefold sleeve printed on silver cardboard, remastered sound by Bob Drake (of Henry Cow fame), and featuring a 20 page booklet with photos and liner notes and a comic strip. Limited edition of only 500 copies. 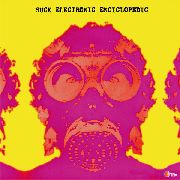