First ever official vinyl reissue, fully remastered, of this highly collectable one-off gem by the Argentinean progsters Eternidad. Originally recorded and released in 1977, around the same period as Bubu’s and Alas’s masterpieces, Apertura thrives with harmonious nostalgia against a blissful sonic canvas. Here, you’re in for a treat in the artfully carved mellow side of prog where the sun always shines and good vibes lurk in every corner. In between dreamy folk openings and secret passages and the typical multilayered instrumental dialogues that evolve gradually into roaring and soaring heights, Apertura endorses stylistic diversity and transmutes it into a unique imprint, akin to a hybrid formation between Arco Iris (Sudamerica o el regreso a la Aurora period), Pacifico and Sui Generis, on the one hand, and Horizonte, Locanda delle Fate, Celeste, Quella Vechia Locanda, on the other. All of the above, enclosed in a picturesque gatefold cover that merges the urban semiosphere with nature in a chiasmic folding. 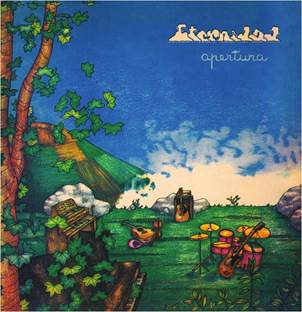