450 COPIES NUMBERED, WITH A DIPTYCH AND FOUR POSTCARDS, ONE SIGNED BY THE BAND.

The story of The Zara’s, a musical group of five brothers and sisters (Marino, Kitty, Jesus, Toto and Anita) starts in Tafalla, Navarra, Spain, in the early fifties and ends in 1977 in Las Vegas, Nevada, USA. For almost three decades they resided in five countries (Spain, France, Italy, Germany and the US), where they performed continuously, releasing six LPs, an EP and a single. They performed with several of the most famous artists in history.

In 1950, Vicente Zaratiegui lost his wife. Marino, the oldest was turning nine. Vicente was an amateur musician of popular music. His mission became to train his five children as professional musicians. Here the saga began. He enrolled them in musical theory classes, guitar, piano and accordion… Soon enough they had a repertoire of jotas, folkloric songs and classical music. During this time they were the opening act in a tour of Juanito Valderrama.
In the mid fifties, the family moved to Paris to continue the group’s career. They got their first electric guitar and slowly, they moved to rock, soul and pop. In France they toured as opening act for Charles Aznavour, Yves Montand, Johnny Hallyday, they toured the French Riviera with Petula Clark and Hallyday. They made many television appearances in France. They spent a half year in Utrera, Andalusia to learn flamenco and about a year in Milano, Italy, to improve their harmony and composition knowledge.

At the end of the 50s, offers to perform in many American bases in France and Germany kept them very busy. They also played the Bases of Torrejon and Zaragoza. In Torrejon they played for John Wayne and Robert Mitchum. They became the idols of the American soldiers in Europe, especially in Germany, where they lived from 1960 until 1969. They played with Sammy Davis Jr, Brenda Lee, Herman’s Hermit’s, Don Gibson o Wee Willie Harris. At that time, they hired prestigious British singers, like Kim Roberts (one of the fetish voices of composer Joe Meek) and Julie Grant (with over 20 edited records in Pye and Disques Vogue), as female lead singers for the band. Julie stayed till the end of the Vegas gigs.

In 1969, they came to New York with a contract to work the prestigious Americana Hotels in the Bahamas, Puerto Rico and Miami. By 1970, they signed a five year contract with the mythical Sahara Hotel and Casino in Las Vegas. They earned thousands of dollars weekly, they shared marquee with Frankie Valli, Louis Prima, The Drifters, Johnny Mathis…. They met Elvis Presley, Frank Sinatra and many others. They lived the splendor of Las Vegas in full swing. They were always making TV appearances, and when they were not in Las Vegas, they were all over the US and Canada. At the end of the contract the Sahara signed them for another year, until 1976. At the end of this contract, the group retired from stage. Marino became the manager of Natalie Cole, daughter of Nat King Cole, and co-produced her first record. He also managed Peter, Paul and Mary, and a few Brazilian groups and he organized tours for Warner Records. Toto Zara, the musical brain of the group, opened a recording studio in Las Vegas that he has operated for over 40 years. Paquita (Kitty) whom had designed and made the stage costumes of The Zara’s, opened her own boutique in Las Vegas, she went on to dress many well known stars. Jesus and Anita both passed away in Las Vegas. Julie Grant continued her singing career. 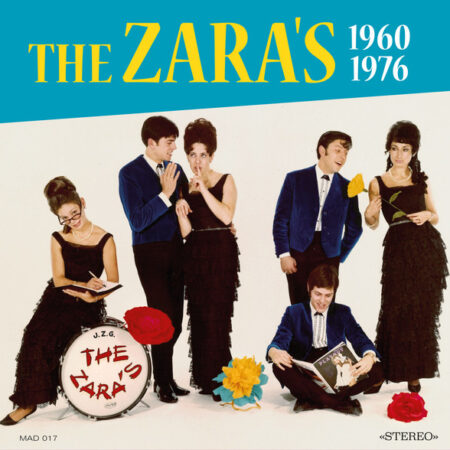